Though little discussed in jazz histories, Leon Roppolo was a foundational figure to the history of jazz clarinet. By 1922, Sidney Bechet had become more focused on soprano saxophone, and many other jazz clarinetists were still struggling with the horn technically. By contrast, Roppolo could lay claim to being the first true jazz soloist to be recorded (as Richard Sudhalter has called him), and in those recordings he set a clarinet style strong enough to influence Irving Fazola, Benny Goodman, Artie Shaw, and Pete Fountain.

Recordings of most other 1920s clarinetists reveal a chunky, rough style, often struggling inconsistently. Yet as early as 1922, Roppolo had developed a cool, confident, brooding approach far in advance of many others. Soon, Jimmie Noone was to burst on the recording scene with even more remarkable technique, but the concept of and phrasing of Roppolo were to remain influential.

It is difficult to explain the importance of Roppolo's approach to a non-clarinetist, and this is perhaps why historians, so often drawn from the brass playing ranks, have neglected him. More than any other register, it is the jazz clarinet altissimo--its expressive potential and flexibility--that seperates jazz approach from classical pedagogy. Roppolo's was polished in a way few others were: he had a haunting combination of lightness and power that was to serve as the template for Goodman, Shaw, Fazola--and indirectly for Pete Fountain.

His three recorded solos on Tin Roof Blues demonstrate this powerfully. Below is my transcription of the second of those solos (according to Richard Sudhalter's timeline, p. 42): 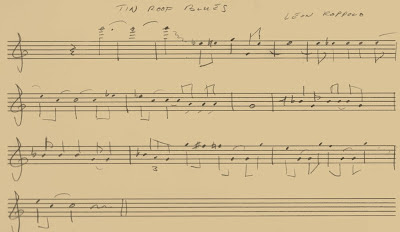 The opening altissimo G is both stronger and more hauntingly beautiful than most clarinets of the era, save the virtuosic Noone. Instead of straining, Roppolo is expressive. The plunging glissando downward is important, not for harmonic or melodic, but timbral importance. The way "Rapp" crackles over the break and hits the clarion e-flat was subtly exceptional for its flexibility and usage. This moment means more than a single figure: it is a demonstration of flexibility that one will not learn in classical pedagogy, and effects the rest of one's clarinet approach if mastered--opening up a timbral language (and eventually new melodic possibilities) as a result. It profoundly and decisively influenced Benny Goodman, as did Roppolo's suave approach.

As Goodman was to bluntly write in The Kingdom of Swing:

My idea of a great clarinet player...was Leon Rapollo, who was playing at the Friars' Inn then with the New Orleans Rhythm Kings, and I did my best to sound like him. I never heard him play in person more than once, but there were plenty of good records to study up on. [p33]

Later, Ben Pollack, who was to give Goodman his decisive break, was to hire Benny precisely because of his similarity to Roppolo [Firestone, p.38].

In the history of jazz, there have been many crimes. White players often, especially in the early years, stole music and styles from black bands, frequently making more money in the process. The history of jazz criticism has wrestled with the cross currents of creativity: what constitutes stealing, what constitutes creativity, and how do we know which is which? Players such as Goodman, Shaw, and Fountain have always rightly acknowledged their debt to black musicians, and Mezz Mezzrow strongly opined in his own book that the New Orleans Rhythm Kings (N.O.R.K.) were a copy of King Oliver's band of the same era. [Mezzrow p. 54] No historian can afford to overlook this--it would be inaccurate, unfair, and wrong.

With this squarely in mind, Leon Roppolo, arguably the centerpiece to the N.O.R.K., has no recorded precedent of any color, and so far as I can tell should be considered clean of cashing in on another's genius. To put it another way his particular way of playing, and influence in jazz history, seems his own. It has been hypothesized that his style is an Italian classical inheritance. This might explain some of it, but I have studied more than one branch of the Italian-American classical clarinet tradition, and nowhere in it have I ever heard anyone who was similar to Roppolo's approach. He is, so far as I can tell, an original. With a clean conscience, then, we may admire him.

Roppolo's style was important for much more than technical flexibility--his clarinet playing was cooler, more brooding, and smoother than the general sensibilities of the era. Every time I see the word suave in the Copland clarinet concerto, I think this couldn't have been written in the score without Roppolo, whose own suave approach so fundamentally effected Benny's, and therefore influenced Copland's commission.

Pete Fountain has said that Irving Fazola was obsessed with Roppolo's playing, and that while Pete himself hardly heard Rapp's recordings, the similarity of approach is undeniable. But perhaps the most surprising comparison is Artie Shaw. So far as I know, Shaw never went into detail about the effects of the N.O.R.K. on his clarinet concept--perhaps he never acknowledged any influence. Brass playing historians such as Sudhalter have heard the influence of Bix Beiderbecke in Shaw's approach, and late in life Shaw talked about transcribing Louis Armstrong. These are certainly true influences, but Roppolo might also have been an important influence. Anyone who has extensively transcribed Shaw cannot help but run into language seeming directly from Roppolo in Shaw's playing--the falling gliss from Tin Roof Blues, as well as the cool detached approach, appears and reappears in various guises in Shaw.