Why Play Jazz? Why Listen to Jazz?

Because it engages the complete musician: the creative intellect, the body, the emotions, the soul. It demands historical knowledge infused with personal creativity: each musician an historian, interpreter, and actor upon the stage of history, simultaneously. It insists upon mathematical mastery of the twelve tones and their various implications, then adds an infinite number of notes in between. Jazz is an endless system which allows musicians to grow into who they were intended to be, sharing the journey as they do so.

Why listen to jazz?

Because it engages the audience in a similar manner. The audience is present to witness, every night, the continuous growth of an art form that contains the expression of many peoples, countless souls: the musical hopes, dreams, loves, sufferings and prayers of the ages, continuing in front of you on that bandstand. But it goes even deeper for a jazz audience, because they actively participate in that history. The emotion and spirit that the band receives from the audience in return for what they’re throwing out there, that grows between an audience and the musicians as the evening progresses: that is the great driving force of jazz.

Posted by Eric Seddon at 9:57 AM No comments:

Email ThisBlogThis!Share to TwitterShare to FacebookShare to Pinterest
Labels: FAQ

You're never done working on your sound. It's in a state of constant flux, because the weather is always changing, and you're always changing, getting older, stronger, weaker; and you're equipment is always changing, aging, being slowly altered each day you play it. I've heard every single one of my musical heroes during a down cycle or a bad day. It's sobering and reassuring. Everybody has them. Most of the jazz greats end up blasting too much at times; many classical players get into a timid zone when they struggle. Even when everybody digs what you're doing, if you don't like it, and if you know something is wrong, you have to keep listening, keep searching, keep refining. It's a dance with perfection. You can't reach it--you are not perfection-- but you can dance with it. The key is to not become antagonistic towards perfection: to not turn it into a boxing match instead of a dance. Because when it becomes a boxing match against perfection, you lose.

Congratulations to BLU Jazz + for being named to DownBeat Magazine's list of 193 Great Jazz Venues around the Globe!

Eric Seddon's Hot Club is honored to be the band asked to host this remarkable nightclub's first ever Mardi Gras bash on Tuesday February 9th! You can order tickets here.

Our line-up at BLU: 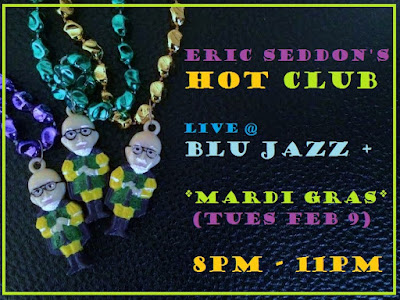 Posted by Eric Seddon at 8:35 AM No comments:

Artie Shaw's chorus on "Star Dust" in 1940 is one of those rare solos people list among the most important ever recorded. His tone, his choice of notes, and his virtuosity all seemed to come together in one lyrical moment, rarely matched by other musicians. Buddy DeFranco called it the greatest jazz solo on record, and countless others have transcribed and studied it.

Enduro reeds were one of the first commercially viable attempts at a synthetic reed, and enjoyed a short heyday during the second world war, when French cane was difficult to obtain. Developed by Brilhart, they were a precursor to today's Fibracell, Legere, and Forestone reeds (among others).

According to New York based clarinetist, Dan Levinson, who discussed it with Shaw before his death, Artie only played on one Enduro reed, ever. And at the time of his death, there was only one Enduro among his possessions, which subsequently passed into the hands of Mr. Levinson.

It's therefore almost certain that the reed used in one of the finest jazz recordings ever made still exists. Mr. Levinson has kindly permitted me to reproduce a photo of Artie Shaw's #4 Enduro reed, likley the very reed played in that iconic recording. Most cane reeds are discarded as soon as they blow out or crack, so just about every reed ever used in classic records are long gone. Coleman Hawkin's "Body and Soul" reed is certainly long lost, as is the reed from Benny Goodman's Carnegie Hall concert, or John Coltrane's "A Love Supreme." But by an interesting quirk of history, that Artie decided to use an Enduro that day, we still have the "Stardust" reed. Amazing.

With the addition of veteran cornet man Jim Davis and Cleveland trad jazz legend George Foley on piano, the Hot Club will take the stage this time as a sextet. We'll be a NOLA stomping, blues wailing, street beating party from 8-11pm--hope to see you there! 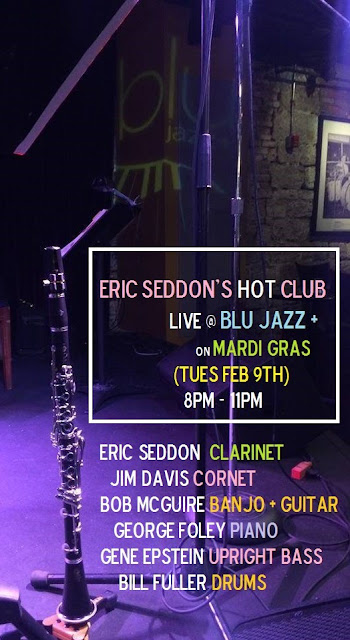 Posted by Eric Seddon at 8:45 AM No comments:

Of all the books written on the subject of jazz clarinet and jazz clarinetists, this one is probably the most absurd, entertaining, and downright ingenious. The full title of this slim, 96 page volume is The Book of Bilk: 41 Characters in Search of an Acker, the front cover featuring a photograph of a dapper Mr. Acker Bilk, in striped waistcoat and bowler hat, raising his glass in a toast to the reader. The back cover delivers blurbs from the Daily Mirror ('A huge success...')  and Francis Newton of The New Statesman, who said the contents of the volume 'Makes most open fun of tradition, of pompousness and history, while simultaneously implying the moral certainties of an older, stabler, epoch.'

I don't know how Newton arrived at such a conclusion from the book itself, or even whether the blurb was an actual quote or a fabricated part of the bizarre, satirical illusion of the book itself, but it does capture something true not only about the sketches inside, but Bilk's music as a whole. There is something ridiculous, but also something stable, unlike any art out there.

Reading the book itself like watching Monty Python, though it predates that Flying Corps by nearly a full decade, which just goes to show that no art is created in a vacuum. The Book of Bilk is comprised of literary and historical parodies from prehistoric man to the present, including (but not limited to):

...and more, all the way to Mr. Acker Bilk himself, descended of these esteemed forefathers (and mothers). The writing is hilarious--filled with satires of Chaucer, Longfellow, Shakespeare, and various historians).

Get one while they're still out there: it's the perfect tonic for an age of solemnified ignorance.

Posted by Eric Seddon at 8:05 AM No comments: