Johnny Dodds is a foundational figure by any estimation, not only in the history of the clarinet, but for jazz in general. His recordings with King Oliver's Creole Orchestra and the Louis Armstrong Hot Fives and Sevens cemented his place as one of the rare soloists strong enough to play alongside Armstrong without giving up musical ground during his choruses. Most often remembered as part of the early New Orleans clarinet triumvirate along with Sidney Bechet and Jimmie Noone, his unique contribution can sometimes seem obscured by those two giants. Bechet had a explosive soloing creativity and overpowering musical personality: in many ways forming a sort of "primary epic" for the jazz clarinet. By contrast, Jimmie Noone was the first great virtuoso, with a perfectly balanced sound, articulation, and facility: universally admired by clarinetists and so intimidating he was rarely copied, except by the likes of Goodman, whose technique could bear comparison. Dodds is generally considered the gritty, bluesy member of the triumvirate, and while he has his devoted followers, he also had his detractors (among them Barney Bigard, who was sometimes acerbic in his criticism).

Yet Dodds is certainly worthy of his equal place in the triumvirate, for the unique contribution he brought: his range of timbre, power, and blues figurations arranged with precise rhythmic structure and meaning. Benny Goodman called him the clarinetist with the greatest sound in the Chicago of his youth, which is saying a lot, considering Jimmie Noone, Leon Roppolo, Omer Simeon, and many others were active on that scene. We can only imagine what he sounded like in person, especially as he was known to distrust microphones and try to stay away from them in recording studios. Still, the documents he left us over the course of his relatively brief career (like Noone and Irving Fazola, he died in his 40s), shows an unprecedented range of timbre. One moment is he full, rich, smooth in tone, the next he sounds as though the intensity of his core sound will rip the clarinet in half. He commanded the extremes and all points in between. And that's not the sum total of his contribution: his technique was far more polished and fluid than most noticed (and by 'most', I include Artie Shaw, Buddy DeFranco and, somewhat embarrassingly, myself as a young man). His soloing style was baroque, but not mere noodling, and his rhythmic understanding was as influential and subtle as any in jazz history. To listen carefully to Johnny Dodds, and to truly understand what he's doing, is in some ways such a thorough education in the facets of jazz that one will be prepared for almost any future development (up through Monk and Miles). To my more mature ears, it seems that with Dodds, it's all there in embryonic form.

Like Bechet he was a prolific composer of his own tunes, which are idiomatic for our instrument and worthy of study. One great example is Indigo Stomp from 1929...at a time when he was also pioneering the clarinet lead trio. Enjoy.
Posted by Eric Seddon at 9:13 AM No comments:

Gregory A. Harrison, the longtime friend and mouthpiece adjuster for Pete Fountain, has published an informative article on the late New Orleans master in The Clarinet this month.

Included are a couple of transcriptions jazz clarinetists will want to look at (the choruses on Tiger Rag and China Boy are among the most important in Pete's career) and a lot of great information on Pete's equipment.

Dr. Harrison has long been a friend of this blog as well: I'm grateful that he has read some of my articles over the years and it was through him that I was able to get back in touch with Pete before his passing. Many thanks Greg, for your continued interest in Pete's work, and willingness to share.
Posted by Eric Seddon at 1:58 PM No comments:

The Hot Club @ the Cleveland Museum of Art

It was great to play for the Winter Lantern Fest at the Cleveland Museum of Art yesterday. We had Kevin Richards on guitar, Gene Epstein on bass, and Bill Fuller on drums. 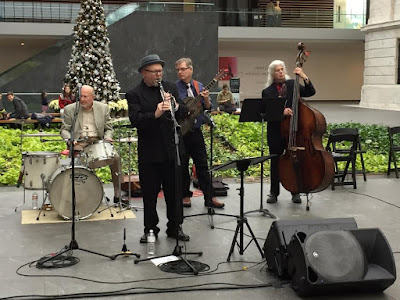 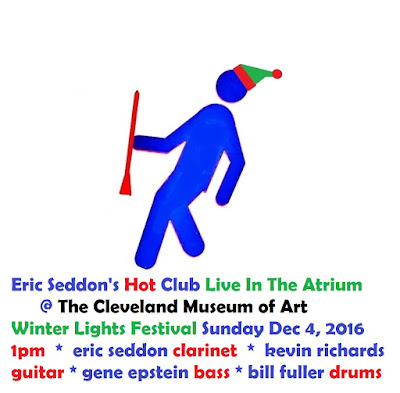 Posted by Eric Seddon at 9:06 AM No comments: