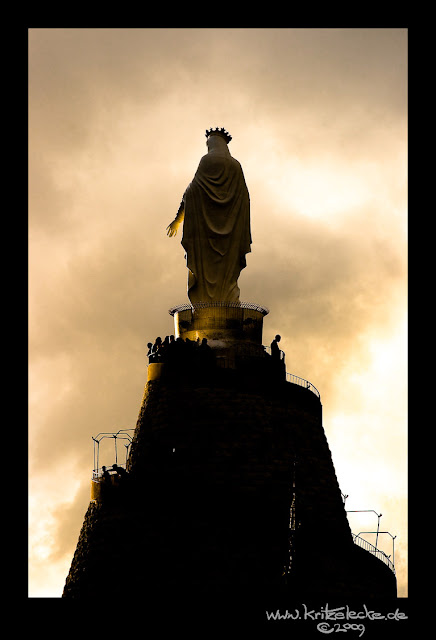 Photo of Our Lady of Lebanon courtesy of leoslifelog : Check out more of Leo's work here.


The centerpiece of Duke Ellington's misnomered masterpiece, The Far East Suite (the locations for which are in the Near and Middle East), is a majestic tone poem entitled "Mt. Harissa."

The inspiration for this movement is the 15 ton bronze statue (painted white) of the Blessed Virgin Mary, known as Our Lady of Lebanon, standing with arms outstretched atop a mountain village some 20 km north of Beirut.

The movement features my favorite solo of Paul Gonsalves, longtime tenor man with the Ellington band. The album was released in 1966, and if you listen carefully, Gonsalves quotes Jobim's "The Girl from Ipanema", which was a smash hit two years earlier for Stan Getz and Joao Gilberto. The lyric of that tune includes a yearning sentiment that the beautiful young subject of the song notice the man singing. Because of this, and because Ellington's "Mt. Harissa" is concerned with the Blessed Virgin, I can't help but hear in Gonsalves' solo a hint of those lines from the Salve Regina: "Turn then, O gracious advocate, thine eyes of mercy towards us..."

Such is the suggestive and poetic power of jazz.

Once again, the stunning image of Our Lady of Lebanon above is used courtesy of a talented photographer's blog found here:  http://leoslifelog.kritzelecke.de/2009/12/31/harissa/

Thank you, Leo, for posting such a moving artwork.  ﻿
Posted by Eric Seddon at 1:17 PM 2 comments:

Twenty seven years ago this week, Jack DeJohnette and Lester Bowie went into Grog Kill Studio in Woodstock to record "Zebra", an album that went virtually unnoticed when it was released, and has yet to be much discussed or appreciated to this day. Inspired by the photography of Tadayuki Naito, it was used as the soundtrack to a video program entitled "Tadayuki Naito/Zebra." I've never seen the video, but have read critics' opinions that this is essentially soundtrack music dependant upon the images, without which there is little value to the album.

In recent years, however, listeners have found that the film scores of composers like Ralph Vaughan Williams (Scott of the Antarctic, Costal Command, The 48th Parallel, etc) and Aaron Copland (Music for a Great City, The Red Pony, etc) , even those seemingly weakened without video context, can have tremendous value as musical expressions in their own right. "Zebra" can easily be added to this list of the worthy, particularly the central track, a tone poem entitled "Aho."

"Aho" according to Wikipedia, is the Lakota word for "Amen." Even before knowing this, I was enveloped in a sensation of deep, peaceful acceptance radiating from this music. So sparsely orchestrated, yet rich, Jack DeJohnette's undulating synthesizer provides a landscape not unlike his drumming so often does, warming the canvas for Bowie's chant-like meditations. The synth part is not so simple as it initially sounds, yet neither does it busy itself.

For some reason this combination of simplicity, accessibility, and avant-garde suggested to me a comparison to Messiaen's massive opera based on the life of St Francis. I couldn't help thinking that this, instead, touched me as being the type of music that I would start with if I was trying to express poverty, love, acceptance, praise of God, and love of nature.

The rest of the album is certainly worth having, though I would warn buyers that the drum machine Jack uses on other tracks, as well as some of the synth settings, will seem dated and perhaps less impressive to some (is the drum machine a tongue in cheek joke from a legendary drummer?) Having said this, I highly recommend the opening and closing tacks, "Ntoro I" and "Ntoro II".

But it is "Aho" that makes this album truly important. Perhaps we're ready to hear it now. So be it.