I learned just yesterday, via the NY Times obituary, that one of the greatest of all clarinetists, William O. Smith (better know to jazz audiences as Bill Smith) passed away last February 29th. He was 93 years old, and lived a life wherein he contributed not only some of the finest jazz of the past century, but expanded our understanding of the clarinet, continuously, for decades. The obituaries will detail his remarkable and unique career - the talented composer who won the Prix de Paris, the Prix de Rome, and who studied with Darius Milhaud and Roger Sessions - the modern jazz master who recorded three albums of his own music with Dave Brubeck at the height of his popularity, but who preferred an academic career to a life of touring and recording. I'm sure there is much more to tell of those facets of his life and work, but his music effected me so deeply, I can't help but share one little story, of how I first heard Smith's music.

I was a teenager in the 1980s, immersed in clarinet playing and specifically jazz, when I happened to meet a monk from Holy Cross Monastery in West Park, NY. My brother and I used to spend time volunteering there--we'd clean the guesthouse before retreats. One of the monks was named Br Roy Parker, and though a soft spoken man, known for the masterful calligraphy he drew, he was in fact a huge fan of jazz, and while working in his shop would often listen to Benny Goodman, Dave Brubeck, and the like. He soon learned of my love of Goodman, Shaw, and others, and we'd talk jazz regularly. One Sunday afternoon when I was there to clean, Br. Roy announced that he was switching over his whole collection of cassette tapes to the newly introduced CD format -- and he gave me first pick of anything in his shop that I wanted. I don't remember all the tapes I took home that day -- but I remember the most important: Near-Myth/Brubeck-Smith.

I had never heard of Bill Smith before, but that album opened new vistas for me as a clarinetist. In contrast to other modern jazz clarinetists, he seemed to come at modern jazz from a the point of view of a clarinetist, rather than through the saxophone. To put it another way, while it was clear he had listened to Charlie Parker, and gained language through that listening, it never seemed he was translating Bird to clarinet. To listen to Smith was to hear a musical personality of such depth, any influences were subservient to his own musical thought. For me personally, his art remains the most fascinating and satisfying of modern jazz clarinet.

His solo from 'The Unihorn' on Near-Myth was the first I ever sat down and transcribed by hand. Years later, I purchased the LP version simply to read the liner notes - it now hangs on my studio wall.


A few years later, as an undergraduate clarinet major at the Hartt School of Music, I was given an assignment by the late Dr. David Macbride: to find a recording of a clarinetist using 'extended techniques' and play it for his 20th century music theory class. While rifling through the stacks of the Hartt Music Library, I stumbled across my first exposure to William O. Smith: Bill's classical side. Here I found him performing his own Concerto for Jazz Soloist and Orchestra, and a cavalcade of extended techniques in his brilliant Variants for clarinet solo. I've published a review of this album here. 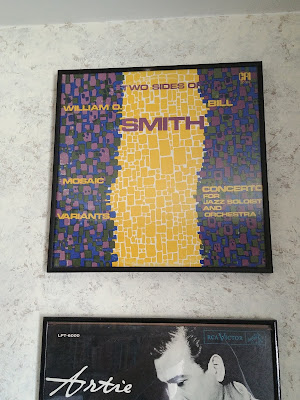 I've made several attempts to get in contact with Bill Smith over the years, but unfortunately failed each time. I'd hoped to get copies of his lead sheets and other works that might not be readily available in print and tried in vain to get a hold of his published jazz clarinet method. If any of you readers know how to procure these things, please don't hesitate to contact me -- I'd appreciate it.

Though very little of his work is reviewed on this blog (his recording of The Riddle with Dave Brubeck might be my only other) it's more because of my admiration, and hopes to do his music justice, that I have refrained. I'll try to rectify that in the coming weeks and months.

But those review's are for another day...today, there's just one more thing...

The day Bill Smith died, I'd actually been messaging a friend about his music, how much it continued to inspire me. And when I learned just yesterday of Smith's death, I tried to find contact information for my old friend, Br. Roy Parker, who I hadn't spoken to in over thirty years. I wanted to let him know about Smith's passing if he hadn't already heard, and to thank him for introducing this music to me. But it turns out Br. Roy passed away just nine days before Bill Smith. Br. Roy was a great artist in his own right, and appreciated all the technical nuances jazz musicians navigated - he would ask me all about those things with great interest. He was a great listener, and learned from what he heard. I hope and pray that he and William O are swapping notes in heaven right now.

The greatest music is so powerful that it impresses itself right onto one's life story. Br. Roy's kindness and Bill Smith's celebratory brilliance will forever be connected in my mind.  May they both rest in eternal peace.

I'm a huge fan of  Gershwin's opera Porgy & Bess -- such a huge fan that I generally don't even like tunes being excerpted by jazz musicians (there are exceptions, like Sidney Bechet's or Pete Fountain's renditions of "Summertime", but I'm really picky). The biggest exception for me is the album that Miles Davis recorded in 1958, featuring his ground breaking trumpet interpretations over Gil Evans's arrangements. The record is like a modern jazz opera in itself, equally satisfying as the original (at least to me). As a wind player, considering what Miles does on his horn, it's also endlessly inspiring.

This musical prayer to the Physician of Souls is a high point for me, though the whole album is worth countless listenings. Stay safe everyone, and God Bless you.


[ This is not a comprehensive list, nor is it representative of the "most important" or "best." Instead, following Duke Ellington's adage that the greatest music and musicians are "beyond category", I'm starting 2020 by sharing 100 jazz tunes I feel everyone should have the chance to hear--really just tunes and performances that I love. ]

Email ThisBlogThis!Share to TwitterShare to FacebookShare to Pinterest
Labels: 100 Jazz Tunes Everyone Should Hear, Miles Davis

To everyone out there who reads The Jazz Clarinet -- I'm praying for all of you, every day during this COVID-19 pandemic. We're all in this together: stay safe, love each other, and listen to some great music when you can. Heres's some Jelly Roll Morton for medicinal purposes.


[ This is not a comprehensive list, nor is it representative of the "most important" or "best." Instead, following Duke Ellington's adage that the greatest music and musicians are "beyond category", I'm starting 2020 by sharing 100 jazz tunes I feel everyone should have the chance to hear--really just tunes and performances that I love. ]

Today I had the unique opportunity to play through many clarinets in the Arthur Benade Collection. Benade was a physicist whose work focused on the acoustics of wind instruments, and who taught at Cleveland's Case Western university from 1952 until his death in 1987. Not only did he study the acoustics of the clarinet in depth, he redesigned them himself, with some truly remarkable results. This morning, his son Martin was kind enough to allow jazz historian and clarinetist John Richmond and me access to the private collection, which is likely to be sold or archived in the near future. Contained in the collection are many rare clarinets--some which seemed to my eye dating from the 18th Century, along with an original Albert clarinet, many large bore Selmers, and Benade's own modified models, among others.

I'll dedicate a future post to a remarkable set of Benade clarinets, modified in 1968 and 1970 according to his acoustic theories, but today's post will feature something I never even dreamt of playing: one of Reginald Kell's clarinets.

The instrument in question is a 1956 Boosey & Hawkes Series 2000 Bb clarinet.

The logos of the horn were well-worn, indicating the instrument had been played frequently. I guess we can hope this wear was from Kell himself. Given the date of the instrument's manufacture, it's at least possible this was the clarinet played on Kell's Decca recordings of 1957, which include the Six Studies in English Folk Songs by Ralph Vaughan Williams, among others. We'll probably never know anything that detailed, but let's just say it's within the realm of historical possibility.

Though it has been in a case, unplayed, for over thirty years, the pads and springs are in remarkable condition. It will need an overhaul if anyone wants to play it seriously, but even so, it's in good enough playing condition to play effectively even now.

The review for and assessment of this clarinet is very simple: it's gorgeous. This Boosey & Hawkes Series 2000 possesses a big, rich, yet nimble tone, particularly in the clarion register. Perhaps the greatest surprise is the plaintive depth it yields in the upper clarion -- it's the type of sound one can't easily get on a Parisian or German horn, but which we hear throughout Kell's recordings. The chalumeau is reedy and substantial, and the altissimo full and easy. The player is capable of getting a rare combination of richness and diversity of color and power. I can't tell you how special it was to play this instrument.

I'm not sure what Martin Benade will ultimately decide to do with this instrument -- whether he will sell it or donate it to a museum or archive. I'm grateful to have had the chance to play it, though, and hope that it will ultimately go to a player who has both the skill as a clarinetist to get great music from it, and an appreciation of its history.

Posted by Eric Seddon at 4:05 PM No comments: